The monument to the 1st Delaware Volunteer Infantry Regiment is south of Gettysburg on the west side of Hancock Avenue near the Brian Farm. (Hancock Avenue at Ziegler’s Grove tour map) A marker showing the position of the regiment’s skirmish line on July 2 and 3 is at the location of the Bliss farm. 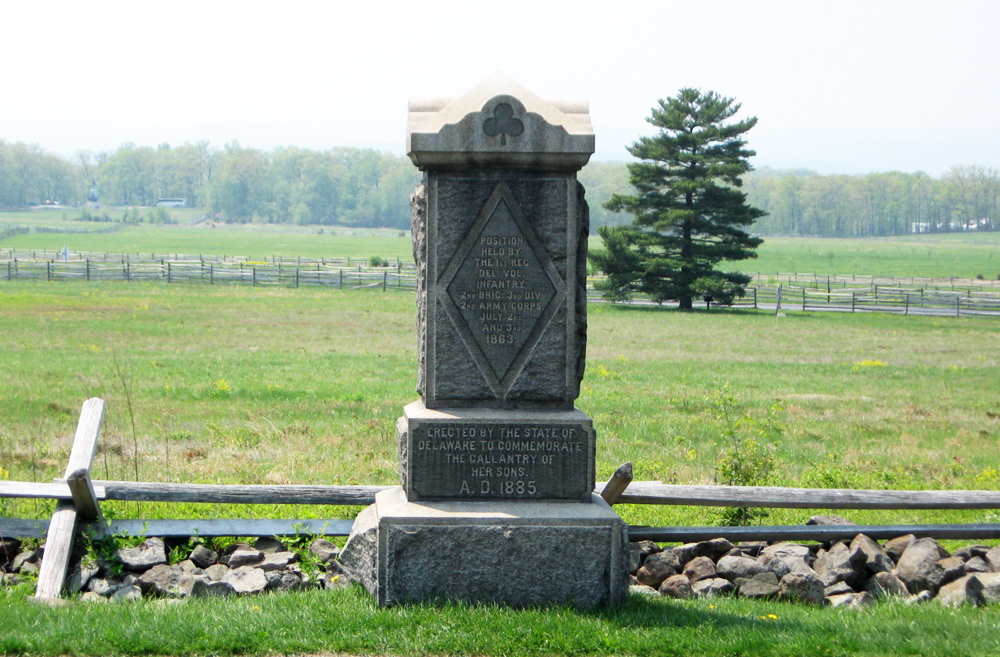 Looking west. Pickett’s Charge crossed the fields from the treeline in the distance, with a handful of North Carolinians reaching the rock wall at the 1st Delaware monument. The Virginia monument is on the left in the trees.

About the Monument to the First Delaware

The monument is carved from Brandywine Blue Granite from Delaware. It stands 7′ 9″ tall, rising from a base that is 3′ 3″ square to a shaft that is 2′ 2″ square. A cap at the top is fronted with the Second Corps trefoil symbol. The main monument was dedicated in 1885 by the State of Delaware, and the position marker in 1886.

The diamond on the front of the monument does not refer to the symbol of the Third Union Army Corps as on many other Gettysburg monuments, but to Delaware’s nickname as the “Diamond State.”

The First Delaware at Gettysburg

Lieutenant Colonel Edward P. Harris commanded the regiment at the start of the battle. He was put under arrest on July 2nd for withdrawing from the Bliss farm buildings without authorization. Captain Thomas Bullock Hizard took over until he was wounded on July 2nd. Lieutenant William Smith then took command until he was killed on July 3. (When Lieutenant Smith was picked up he had a Confederate flag in one hand, believed to be the flag of the 5th Alabama Battalion.) Lieutenant John Dent then took over for the rest of the battle. Lieutenant Colonel Harris was restored to command on July 4.

The regiment brought 288 men to Gettysburg, of whom 10 were killed, 54 wounded and 13 missing.

Erected by the State of
Delaware to commemorate
the gallantry of her sons.
A.D. 1885

Marker for the 1st Delaware at the Bliss Barn at Gettysburg

From the Bliss farm marker:

The 1st Delaware Infantry is also honored with a monument at Antietam.