The monument to the 3rd Brigade, 3rd Division, 5th Army Corps is south of Gettysburg on Sykes Avenue. (Big Round Top tour map)

The brigade was one of three brigades of Pennsylvania Reserves, two of which had joined the Army of the Potomac on the eve of the battle after spending several months in the Washington defences. 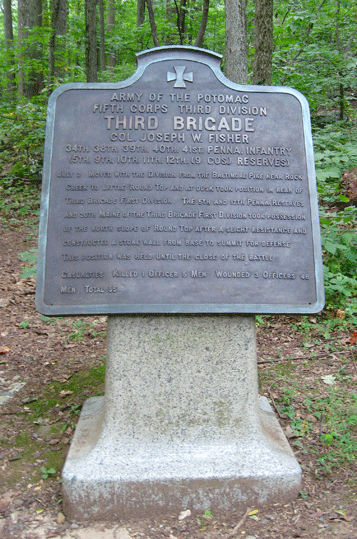 Monument to the 3rd Brigade, 3rd Division of the 5th Corps at Gettysburg

July 2. Moved with the Division from the Baltimore Pike near Rock Creek to Little Round Top and at dusk took position in rear of Third Brigade First Division. The 5th and 12th Penna. Reserves and 20th Maine of the Third Brigade First Division took possession of the north slope of Round Top after a slight resistance and constructed a stone wall from base to summit for defense. This position was held until the close of the battle.

Colonel Joseph W. Fisher commanded the brigade at the Battle of Gettysburg. Fisher was an attorney and state representative from Northumberland County, Pennsylvania. When war broke out he became lieutenant colonel of the 5th Pennsylvania Reserve Regiment, and was promoted to Colonel after Colonel Simmons was killed during the Seven Days in 1862. At Fredericksburg Fisher assumed command of the brigade as senior colonel when Brigadier General Jackson was killed in Meade’s attack. He continued to command the brigade until after the Battle of Cold Harbor, when his regiment was mustered out. Late in the war he became colonel of the 195th Pennsylvania Infantry Regiment.

Location of the monument to the 3rd Brigade, 3rd Division, 5th Corps at Gettysburg

The monument is south of Gettysburg at the foot of Big Round Top. It is on the south side of South Confederate Avenue (which turns into Sykes Avenue at this point) which is one way eastbound. The monument is about 115 feet from the avenue, behind the monument to the 10th Pennsylvania Reserves.