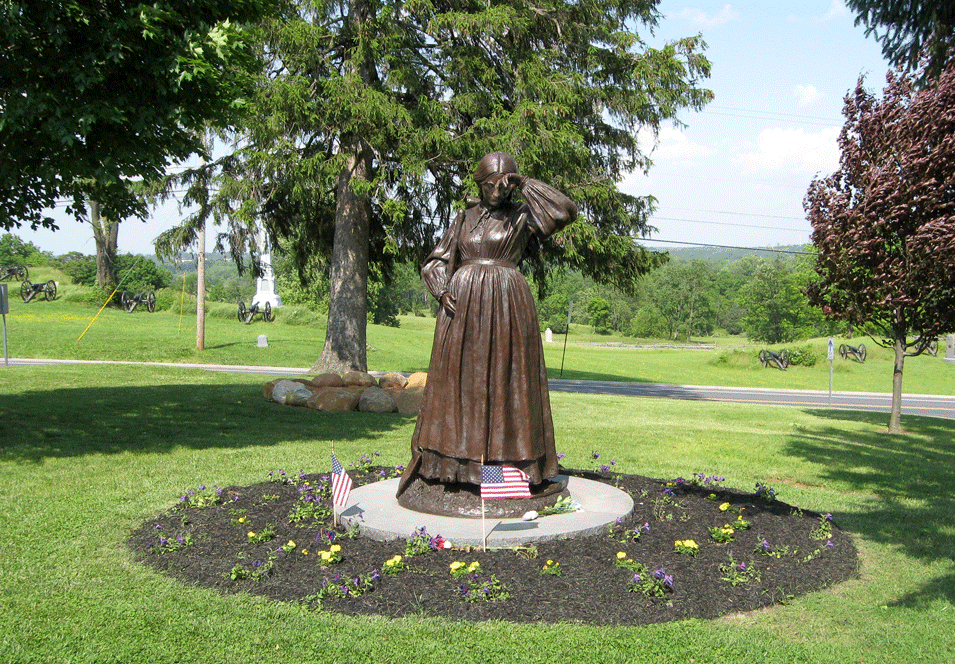 The Gettysburg Women’s Memorial is a tribute to the women of Gettysburg who served and suffered because of the battle. It depicts Elizabeth Thorn, wife of the caretaker of Evergreen Cemetery. At the time of the battle she was six months pregnant and caring for three sons and her elderly parents. Her husband was away serving with the 138th Pennsylvania Infantry, which was serving in Virginia during the Gettysburg Campaign.

During the battle Thorn and her family were forced to flee their home in the gatehouse, which was witness to hand-to-hand fighting on July 2nd. She returned to find her food and possessions stolen and dead bodies lying unburied everywhere.

As caretaker of the cemetery, she was ordered to begin burying casualties, Men were detailed to help but one by one they slipped away, unable to bear the work. The statue depicts a weary Thorn leaning on a shovel as she rests from burying 91 casualties from the battle.

Elizabeth gave birth to a daughter, Rose Meade, that month. The child was never healthy, though, and died at the age of 14. Elizabeth always believed the stress of the battle and her work burying its victims affected her unborn daughter.

Elizabeth’s husband returned safely after Appomattox, and the couple stayed at the cemetery until 1874.

The monument was dedicated in 2002. It was created by sculptor Ron Tunison, who also created the bas relief on the Delaware State Monument, the Friend to Friend Masonic Memorial and the General Crawford monument at Gettysburg and the bas reliefs on the Irish Brigade monument at Antietam.