The monument to Major General Henry Slocum is south of Gettysburg on Slocum Avenue. (Stevens Knoll tour map) It was dedicated on September 19, 1902 by the State of New York.

The monument is a bronze equestrian statue created by sculptor Edward Clark Potter. Potter made a number of equestrian statues but is best known for the lions in front of the New York Public Library. Slocum’s statue weighs 7,300 pounds and stands 15′ 6″ tall. It rests on a 16′ tall base of Barre granite designed by A.J. Zabriskie. Large bronze inscribed tablets are inset into the base on each side. 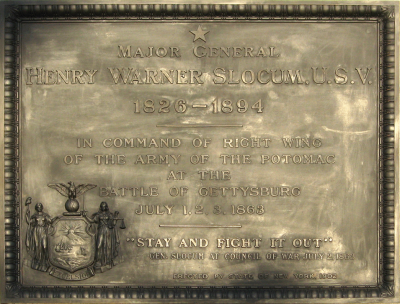 Erected by the State of New York 1902

Assumed command of the 20th Corps August 27, 1864 and the left wing of Sherman’s Army known as the Army of Georgia, November 11, 1864. Assigned in orders dated June 27, 1865 to command of the Department of the Mississippi, Headquarters at Vicksburg which he held until relieved September 18, 1865 and on September 28, 1865 Gen’l. Slocum resigned from the Army and was honorably discharged.

Henry Warner Slocum was born at Delphi, New York on September 24, 1826. He graduated from West Point with the class of 1852, and served against the Seminoles and in Charleston Harbor. In 1856 he resigned his commission to practice law, settling in Syracuse and becoming a state legislator and a colonel in the state militia.

Slocum became Colonel of the 27th New York at the outbreak of the war. He was wounded at First Bull Run. After he recovered he was given a brigade and then a division in Franklin’s 6th Corps. After Antietam he was given command of the 12th Corps, which performed well at Chancellorsville, although Slocum scathingly criticized Hooker.

Slocum has been criticized for delaying his arrival at Gettysburg while sending his troops on ahead on the first day. He knew that as senior corps commander he would assume command if he arrived before Meade. He did command the army for about six hours in the evening of July 1, until Meade arrived after midnight. Slocum was responsible for holding the right flank of the army. He successfully defended it against repeated attacks by Ewell’s Confederate 2nd Corps.

The 12th Corps was one of two corps of the Army of the Potomac chosen to go west under Hooker’s command following the Union debacle at Chickamauga . Slocum immediately sent in his resignation. It was refused. A compromise was achieved where Slocum and a part of his Corps would operate independently of Hooker.

When Hooker eventually resigned (over being asked to serve under former subordinate Oliver Howard) Slocum was called to take over the 20th Corps, which was the first Union unit enter Atlanta. Slocum commanded the left wing of Sherman’s Army (the Army of Georgia) on the March to the Sea.

After the war Slocum practiced law in Brooklyn and served three terms as a Democratic U.S. congressman. He also served on the Board of the Gettysburg Monument Commissioners. Henry Slocum died in Brooklyn in 1894

Location of the monument to Henry Slocum at Gettysburg

The monument to Major General Henry Slocum at Gettysburg is on the north side of Slocum Avenue. It is about 70 yards southwest of its intersection with Williams Road. (39°49’08.9″N 77°13’28.5″W)