Mahone’s Brigade saw little fighting at Gettysburg. It was positioned to join into Longstreet’s attack on July 2nd. Both Wright’s and Posey’s brigades requested support from Mahone in their advance on Cemetery Ridge but he refused, saying he had other orders. The brigade was then planned to take part in the attack against Cemetery Hill by the Second Corps that evening, but the attack had failed before Mahone could join and they returned to their breastworks.

The fact that the relatively rested and unblooded brigade was not included in Pickett’s Charge on the 3rd when several other much more badly hurt units did shows a serious failure of Confederate staff work. The fresh and rested brigade was a front row spectator of the bloody charge.

Mahone went on in 1864 to be one of Lee’s hardest-hitting division commanders but no one could have predicted that from his performance at Gettysburg. His brigade contributed very little, and ended the battle with the lowest casualties of any Confederate brigade.

July 2. Arrived and took position here in the forenoon under orders to support the artillery. A strong skirmish line was sent out which was constantly engaged and did effective service.

July 3. Remained here in support of the artillery. Took no active part in the battle except by skirmishers.

July 4. In line here all day. At dark began the march to Hagerstown.

Brigadier General William Mahone commanded the brigade at Gettysburg by . Mahone was a VMI graduate, railroad engineer and railroad president. 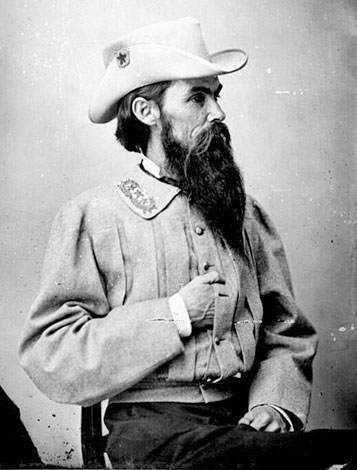 The monument to Mahone’s Brigade is southwest of Gettysburg on the west side of West Confederate Avenue, which is one way southbound at this point. It is about 1,000 feet south of the North Carolina monument and 700 feet north of the Virginia monument.

See the history of the regiments in Mahone’s Brigade in the Civil War: