July 2. Engaged in the evening with 3rd Division Cavalry Corps near Hunterstown. Cobb’s Legion led the attack and lost a number of officers and men killed and wounded.

July 3. The Brigade arrived here about noon and skirmished with Union sharpshooters. In the afternoon the 1st North Carolina and Jeff Davis’ Legion advancing in support of Chambliss’ Brigade drove the Union cavalry but met their reserve and were in a critical position when the Brigade went to their support and a hand to hand fight ensued in which Brig. Gen. Wade Hampton was severely wounded. The conflict ended in the failure of the Confederates in their purpose to assail the rear of the Union Army 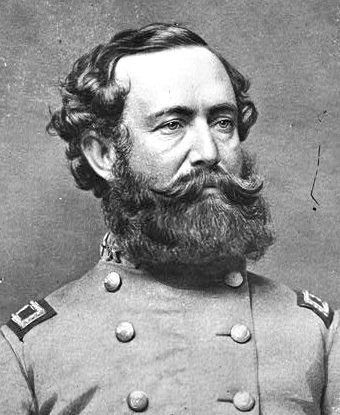 The brigade was commanded at the Battle of Gettysburg by Brigadier General Wade Hampton III, a South Carolina planter who was one of the wealthiest men in the South.

Hampton was badly wounded in fighting east of town with Custer’s Michigan Cavalry Brigade, receiving three saber cuts to the head and shrapnel in his hip. After Hampton was wounded the brigade was commanded by Colonel Laurence S. Baker of the 1st North Carolina Cavalry Regiment.

Hampton shared an ambulance with Major General John Hood on the way back to Virginia and recovered from his injuries to eventually take J.E.B. Stuart’s place as commander of the cavalry corps of the Army of Northern Virginia. He would survive the war to become both Governor of and Federal Senator from South Carolina.

Location of the monument to Hampton’s Brigade

The monument is on the East Cavalry Battlefield about 3 miles east of the edge of Gettysburg. It is on the west side of Confederate Cavalry Avenue about 850 feet south of it’s hard turn south along the edge of the Rummel farm field. (39°50’11.4″N 77°10’07.8″W)