A monument and two position markers to the 1st United States Cavalry Regiment are south of Gettysburg on the South Cavalry Field near Emmitsburg Road.

Detachment at Headquarters Army of the Potomac.

July 3. Moved with the Brigade at 12 m. under Brig. General W. Merritt from Emmitsburg and attacked the Confederate right and rear and was engaged for four hours until the action was brought to close by a heavy rain.

Two markers, one off Ridge Road and the other west of Emmitsburg Road have the same inscription:

A sign on Emmistburg Road points the way to the marker west of the road. 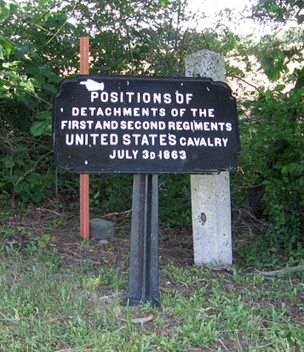 Pointer to the 1st and 2nd U.S. Cavalry marker west of Emmitsburg Road

Trail from Ridge Road to the 1st and 2nd U.S. Cavalry marker