The monument to the 3rd Brigade, 2nd Division, 6th Corps is southeast of Gettysburg on Neill Avenue. Neill Avenue was never paved and is not connected to the road system.

Monument to the Headquarters of the 6th Corps, 2nd Division, 3rd Brigade at Gettysburg

July 3. The Brigade by order of Major Gen. Slocum crossed Rock Creek and took position on the extreme right of the Army making connection with the Cavalry pickets and encountered and checked the advancing Confederate sharpshooters and skirmishers and remained until the close of the battle.

Brigadier General Thomas H. Neill commanded the brigade at the Battle of Gettysburg. Neill (West Point Class of 1847) was a career Army officer from Philadelphia, Pennsylvania. 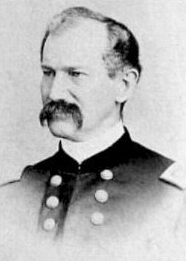 The monument is located southeast of Gettysburg. Neill Avenue is almost surrounded by private property and very difficult to reach, leading it to be known as “Lost Lane.” Please respect the property owners and do not trespass. (39°48’28.9″N 77°12’35.0″W)