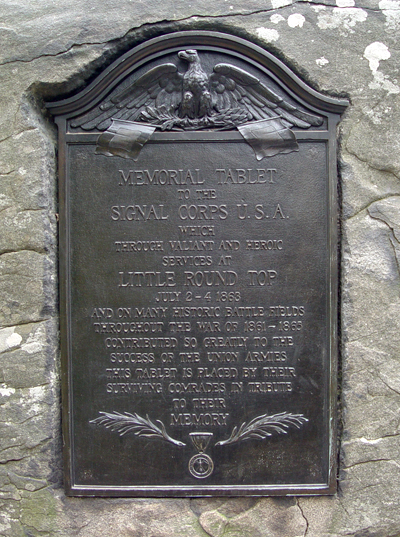 The Signal Corps at Gettysburg

The first body of troops on Little Round Top on July 2nd was a handful of men from the Signal Corps. Armed with large flags and a telescope, their mission was to observe the battlefield and communicate with other signal stations. They were part of a network of stations that linked Meade’s headquarters at the Leister House with different parts of the the battlefield: Cemetery Hill, Powers Hill, Culp’s Hill and Little Round Top.

Lieutenant Aaron B. Jerome and Captain James S. Hall were part of the detachment on Little Round Top. They played a major role in the battle by causing Longstreet to detour the approach march to his attack on July 2nd. Longstreet realized he was coming into view of the Union signalmen and rerouted his march to what he thought was a more concealed route. This delayed the attack for a considerable time, but it was in vain, as his march was detected. The signalmen warned Meade, and reinforcements were sent toward the flank which – barely – fought off the Confederate attack.

The Little Round Top station was abandoned during the fighting in the afternoon and evening of July 2nd. Captain Edward C. Pierce and Sergeant Luther C. Furst re-manned the station on July 3rd, although they were forced to use messengers rather than flags because of Confederate sharpshooters in the Devils Den.

Meade’s Headquarters at the Leister House was another dangerous signal post on July 3rd. Captain Davis E. Castle remained on duty there throughout the bombardment preceding Pickett’s Charge. He used a bedsheet attached to a pole after his signalman left at the height of the bombardment with all the signal equipment.

Memorial Tablet
to the
Signal Corps U.S.A.
which
through valiant and heroic
services at
Little Round Top
July 2-4 1863
and on many historic battle fields
throughout the war of 1861-1865
contributed so greatly to the
success of the Union Armies.
This tablet is placed by their
surviving comrades in tribute
to their memory 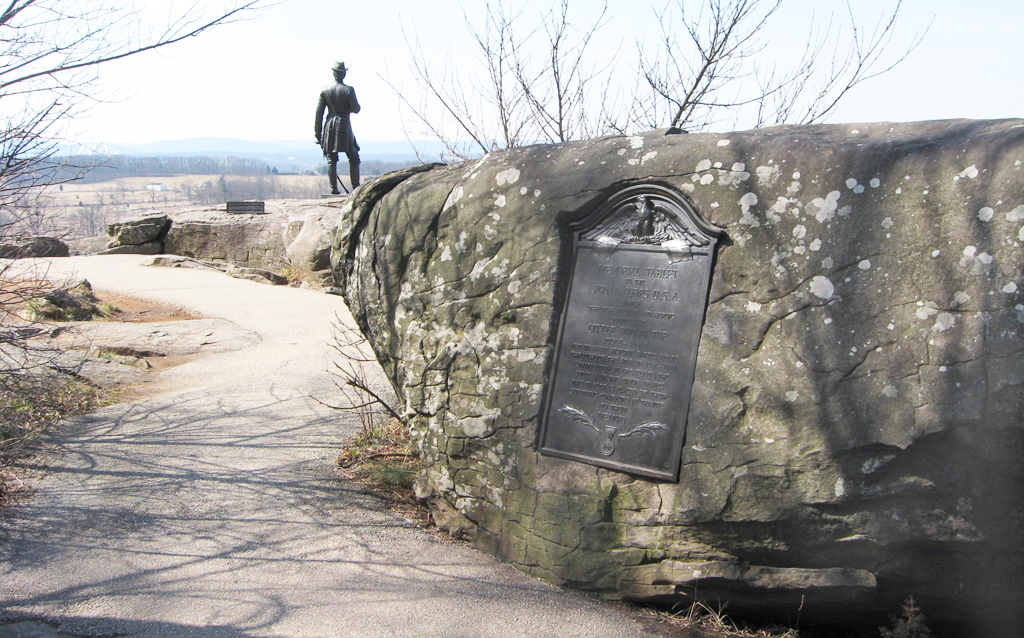 Signal corps monument inset into a boulder on Little Round Top. General Warren’s monument is in the distance.

Location of the Signal Corps memorial at Gettysburg