The monument to Union Captain Henry V. Fuller is in the Rose Woods south of the Wheatfield. (Detrobriand Avenue – the Wheatfield tour map) One of the least visited monuments on the battlefield, it was dedicated by the survivors of his company in 1894.

Henry Fuller of Little Valley, New York was 22 years old at the time of his death at Gettysburg. He was a veteran of a dozen battles and skirmishes and had risen through the ranks from private to Orderly Sergeant to Second and First Lieutenant and finally to Captain and commander of Company F.

As the regiment was withdrawing Captain Fuller was wounded in the leg. Private George Whipple came to his aid to try to help him to the rear, but Fuller was hit again, a mortal wound to his back. Whipple stayed with him as he died, and was captured by advancing Georgians.

Fuller’s body was recovered on July 4th and he was buried two weeks later in Little Valley Cemetery in New York. He left behind his wife, Adelaide, and their one year old son Henry. 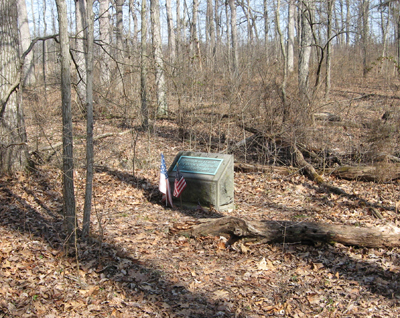 The monument to Captain Henry V. Fuller is south of Gettysburg in the Rose Woods south of the Wheatfield. It is one of the harder to find monuments on the Gettysburg battlefield, standing in low and wet ground some distance from the nearest path, surrounded on three sides by a loop of Rose Run, and often obscured by brush. (39°47’41.5″N 77°14’42.6″W)