The eight and a half foot tall bronze statue was sculpted by John Massey Rhind, who created a number of statues at Gettysburg. It stands on a ten foot granite base. An inscribed metal tablet is on the front of the monument above the crescent moon symbol of the Eleventh Corps. The monument was dedicated by the State of New York on June 6, 1922.

Wounded severely at Antietam and Gettysburg.

Brevetted Major-General Volunteers August 1, 1864 “for highly meritorious conduct throughout the campaign, and particularly for gallant and good conduct while leading his division in the assault on the enemy’s works at Spotsylvania, May 12, 1864.” 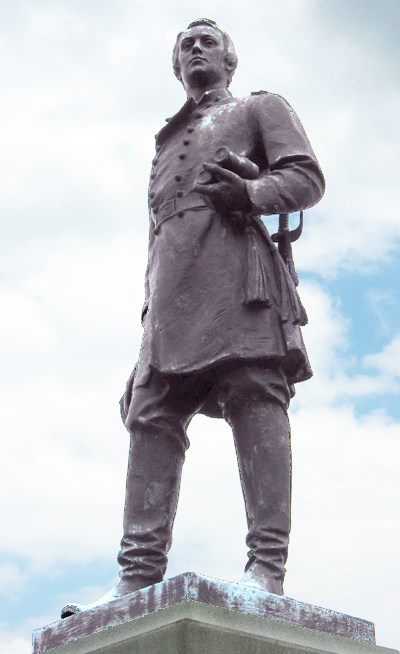 Francis Barlow was 29 at the Battle of Gettysburg. He had started his military career as a private, become the Lieutenant Colonel of the 61st New York, and was promoted to Brigadier General in September 1862.

Badly wounded at Antietam, he had been given a troubled brigade in the Eleventh Corps on his return to duty. His brigade was routed at Chancellorsville by Jackson’s flank attack, but after the battle Barlow was promoted to division command.

At Gettysburg Barlow’s men held the extreme right of the Union line north of town. He had pushed his division far forward, believing the knoll that now bears his name would be valuable ground to anchor his line. But as Early’s Second Corps arrived on the exposed Union flank the position became untenable.

Barlow was shot as he tried to rally his disintegrating line. He dismounted and two men tried to help him to the rear until one of them was also wounded. Barlow, alone now, was struck a second time by a spent ball and could no longer stand. As the Confederates swept forward the fight raged over him briefly and his finger and clothing were grazed by bullets.

A Confederate staff officer, Lt. A.L. Pitzer, and some of his men carried Barlow to what they believed was a safe place in the rear and provided him with water. But Union artillery soon began to shell the area, so Union prisoners helped move him to a house further to the rear. He was told he was not expected to survive.

Nursed by an elderly lady and her daughter in a house on the north side of town, he was exchanged by the Confederates due to the seriousness of his wound.

He recovered and returned to command a division in the 1864 campaign, and briefly commanded the 2nd Corps at the end of the war. After the war he returned to the law until his death in 1896.

For years a story was told of how Confederate General John B. Gordon succored the stricken Barlow on the field, then met him years later at a dinner after believing him dead. There was even a diorama in the Cyclorama building at the park illustrating the event.

But Barlow never mentioned Gordon, although he wrote of a “Major Pitzera” in a detailed letter to his mother. It is very possible that the tale may have been an embellishment or an outright fabrication that Gordon, a master storyteller, used in his career on the speaker’s circuit.