Charles Henry Tucker Collis was born in Ireland and arrived in Philadelphia in 1853. In a few years he became a lawyer, and at the start of the Civil War joined the 18th Pennsylvania Infantry Regiment . At the end of his three month enlistment he returned to Philadelphia to form a company known as the Zouaves D’ Afrique, modeled after the elite Algerian troops of the French Army. Many of the men were veterans of European service, and the material for the uniforms came from the French army.

The company’s success resulted in Collis being instructed to raise an entire regiment, and within five weeks the additional nine companies were recruited.

Collis fought in several major battles but was wounded at Chancellorsville and missed Gettysburg. In 1864 he was breveted as brigadier general, and later major general. He received the Medal of Honor for his conduct at Fredericksburg.

After the war Collis built a summer house in Gettysburg which still stands on Seminary Ridge just off the Fairfield Road at the beginning of West Confederate Avenue. The cottage, named “Red Patch” after the 3rd Corps symbol, has bedrooms named after Union generals. 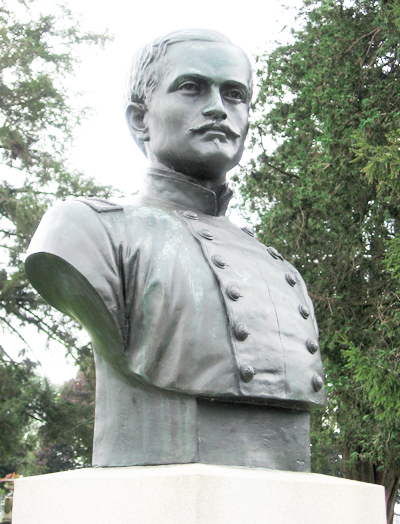 Closeup of the bust from the monument

The monument to Brevet Major General Charles Collis is southeast of Gettysburg in the National Cemetery, about 70 yards west of the Soldiers National Monument. (39°49’11.8″N 77°13’55.1″W)