The monument to Union Sergeant Amos Humiston is in Gettysburg on Stratton Street. It was dedicated in 1993. This is the only monument to an individual enlisted man on the Gettysburg battlefield. 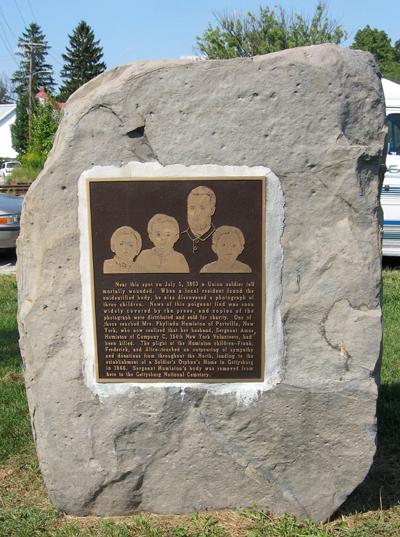 From the tablet on the monument

Near this spot on July 1, 1863 a Union soldier fell mortally wounded. When a local resident found the unidentified body, he also discovered a photograph of three children. News of this poignant find was soon widely covered by the press, and copies of the photograph were distributed and sold for charity. One of these reached Mrs. Phylinda Humiston of Portville, New York, who now realized that her husband, Sergeant Amos Humiston of Company C, 154th New York Volunteers, had been killed. The plight of the Humiston children – Frank, Frederick, and Alice – touched an outpouring of sympathy and donations from throughout the North, leading to the establishment of a Soldier’s Orphan’s Home in Gettysburg in 1866. Sergeant Humiston’s body was removed from here to the Gettysburg National Cemetery. 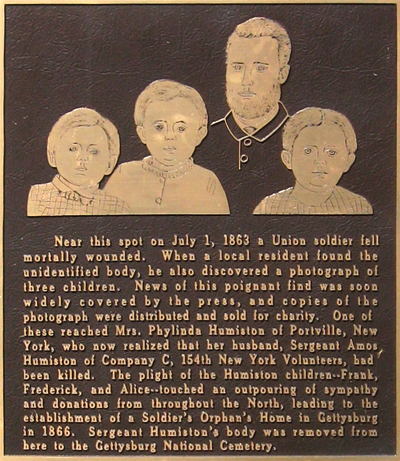 Shortly after the battle of Gettysburg the daughter of an area tavern keeper, Benjamin Schriver, found the body of an unidentified soldier lovingly clutching an ambrotype photo of three children. She brought the photo back to her father’s tavern in Graeffenburg where it became a local attraction alongside many other mementos from the battle.

Fate in the form of a broken down wagon brought Dr. John Bourns from Philadelphia to the tavern. When he saw the image he knew that somewhere a family needed to know the final resting place of a missing father.

Dr. Bourns talked Schriver into giving him the photo, which he copied in the popular carte de visite format. He sent some copies to newspapers throughout the North, while he sold others to raise funds.

The story spread for weeks. Then in October news came from western New York. The family had been found. A friend had passed on a copy of a newspaper. The Humiston family had received no letters or news from their loved one since the great battle, and now their worst fears were confirmed. Dr. Bourn traveled there. In an emotional meeting he presented them with the original photo and the funds that had been raised.

An orphanage was founded in Gettysburg on Cemetery Hill under Dr. Bourn’s direction. The Humiston family came to live there, with Phylinda Humiston on the staff. But Gettysburg was not a happy place for them. They moved away after Phylinda remarried. Years later the orphanage would come to an end amid charges of mismanagement and mistreatment of the children.

The Humiston children had moved on long before then and did well in their lives. All attended Lawrence Academy in Massachusetts. Fred became a successful merchant and Frank became a doctor. And although she would eventually die in a tragic accident, Alice outlived them all, until 1933. Three lives that were profoundly changed by the act of a loving father who wanted to look at his children one last time.

Location of the monument to Amos Humiston in Gettysburg