Virginia contributed over 19,000 men to the Army of Northern Virginia at Gettysburg, the largest contingent from the twelve Confederate states. Almost 4,500 of these – almost 1 out of 4 – became casualties, the second highest state total (see the States at Gettysburg).

State of Virginia monument at Gettysburg, topped with the statue of Robert E. Lee

The monument stands 41 feet high, with the statue of Lee and Traveler standing 14 feet high. It is the largest of the Confederate monuments on the Gettysburg battlefield, a fitting tribute to the state that provided the largest contingent to the Army of Northern Virginia, its commander, and its name. Lee’s figure, stands atop the monument astride his favorite horse, Traveler. The statue was created by sculptor Frederick Sievers from photographs and life masks of the general. Sievers even went to Lexington, Virginia to study Traveler’s skeleton, preserved at Washington and Lee University. The total cost of the monument was $50,000.

Virginia to her sons at Gettysburg

Confederate soldiers from the State of Virginia monument at Gettysburg

Below Lee as he studies the distant Union lines are seven Confederate soldiers. According to the marker at the base of the monument:

The group represents various types who left civil occupations to join the Confederate Army. Left to right;
a professional man, a mechanic, an artist, a boy, a business man, a farmer, a youth.

Three of the representative Virginians from the monument: a professional man, a mechanic, an artist. 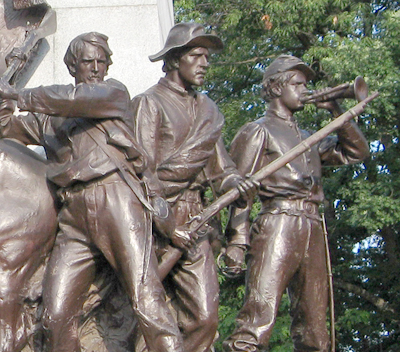 From the right side of the monument: a business man, a farmer, a youth

Location of the Virginia monument at Gettysburg