Law’s Brigade arrived on the battlefield on July 2nd after a long, hot march and were assigned the right flank of Longstreet’s attack. When General Hood was wounded early in the assault Law took over the division as senior brigade commander, but the transition went poorly. It took time for Law to find out Hood was wounded, he did not notify his senior colonel to take over his brigade, and neither brigade nor division received firm direction.

The result was that the Confederate assault lacked coordination and there was no support to consolidate and exploit the initially succesful assults that overran Devil’s Den and almost took Little Round Top. Law’s Brigade had seized an advanced position but failed to deliver the knockout blow that Lee hoped for.

Lee had wished to include Hood’s Division in the great attack on July 3rd but it was decided that it had been too badly battered on the 2nd. Law’s Brigade, now under Colonel James L. Sheffield of the 48th Alabama Infantry, easily defended its position against encroaching Union skirmishers and a spectacular but hopeless cavalry charge led by Union Brigadier General Elon Farnsworth. 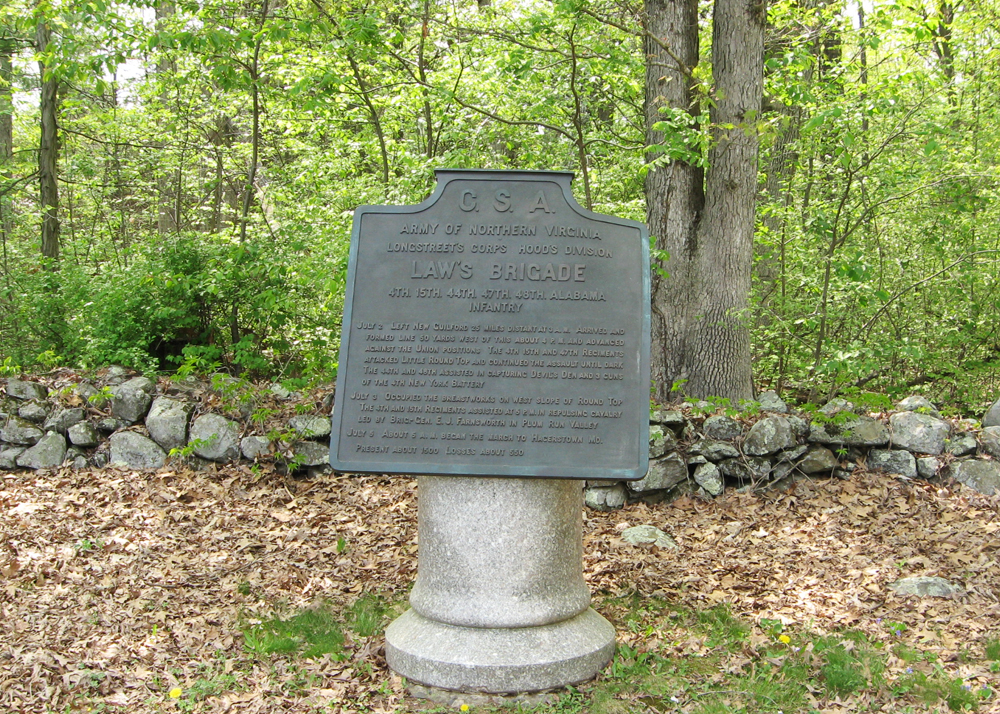 July 2. Left New Guilford 25 miles distant at 3 A.M. Arrived and formed line 50 yards west of this about 4 P.M. and advanced against the Union positions. The 4th 15th and 47th Regiments attacked Little Round Top and continued the assault until dark. The 44th and 48th assisted in capturing Devil’s Den and 3 guns of the 4th New York Battery.

July 3. Occupied the breastworks on west slope of Round Top. The 4th and 15th Regiments assisted at 5 P. M. in repulsing cavalry led by Brig. Gen. E. J. Farnsworth in Plum Run Valley.

July 5. About 5 A.M. began the march to Hagerstown Md.

Location of the monument to Law’s Brigade

July 2. Arrived on the field about 4 P. M. and advanced against the Union positions. The 4th 15th and 47th Regiments attacked Little Round Top and continued the assault until dark. The 44th and 48th assisted in capturing Devil’s Den and 3 guns of Smith’s 4th New York Battery.

The position marker is south of Gettysburg in the saddle between Big and Little Round Top. It is on the southwest side of Warren Avenue about 160 feet northwest of the intersection with South Confederate Avenue/Sykes Avenue/Wright Avenue.

Brigadier General Evander McIver Law commanded the brigade at the Battle of Gettysburg. Law was born in Darlington, South Carolina, the descendent of Revolutionary War veterans.  Law graduated from the South Carolina Military Academy in 1856 and taught history at the Kings Mountain Military Academy. In 1860 he moved to Tuskegee, Alabama to start a military high school.

When Alabama seceded from the United States Law joined the militia. In April of 1861 he became a captain in the 4th Alabama Infantry Regiment, and was quickly promoted to Lieutenant Colonel. The regiment went to Virginia and fought at the Battle of Manassas (Bull Run), where the regiment’s colonel was killed and Law was wounded in the arm. When Law returned to the regiment in October of 1861 he was promoted to colonel. In May of 1862 he took command of his brigade as senior colonel, leading it through the Peninsula Campaign, the Second Battle of Manassas (Bull Run) and at Sharpsburg (Antietam). In October he was promoted to brigadier general and given permanent command of the brigade.

Law went west with Longstreet’s 1st Corps only to become caught up in its command politics. Law was blamed for poor performance at  Lookout Valley and at Campbell Station. He was just one of several general officers arrested or court-martialled by the end of the campaign. Only a meeting with the wounded Hood in Richmond prevented Law from resigning from the army, but he began the Overland Campaign under arrest in the rear. He finally returned to command of his brigade at the Battle of Cold Harbor but was immediately severely wounded in the head. He would not return to the Army of Northern Virginia, commanding cavalry in South Carolina to the end of the war.