Jenkins’ Brigade had operated in western Virginia and joined the Army of the Potomac for the first time for the Gettysburg campaign. It had not accompanied Stuart in his ride around the Union army but had been attached to the Second Corps, which had spearheaded the invasion of the North.

The brigade was used to partisan and home guard operations west of the mountains and had not done well keeping up with Jackson’s old “Foot Cavalry.” Straggling and desertion were heavy, and horse thievery and violence to civilians were excessive.

Worse, the brigade had not fulfilled its mission on July 2nd to cover Ewell’s left flank while he assaulted Culp’s Hill. Ewell was forced to detach two brigades of infantry for the task, which made a critical difference in the failure to take the position. Finally, on July 3rd, the brigade arrived for Stuart’s main drive around the flank of the Union army with less than ten rounds per man, severely limiting its effectiveness.

After the Lee’s army returned to Virginia the brigade parted ways and returned to its western mountains, to the great relief of everyone. 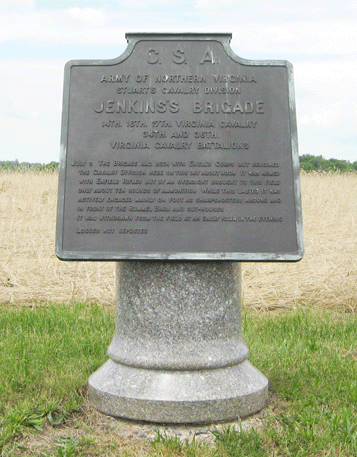 July 3. The Brigade had been with Ewell’s Corps but rejoined the Cavalry Division here on this day about noon. It was armed with Enfield Rifles but an oversight brought to this field only about ten rounds of ammunition. While this lasted it was actively engaged mainly on foot as sharpshooters around and in front of the Rummel Barn and outhouses. It was withdrawn from the field at an early hour in the evening.

Brigadier General Albert Jenkins commanded the brigade at Gettysburg. Jenkins was a planter and U.S. and Confederate Congressman from western Virginia. He was wounded by artillery on July 2nd while surveying Union positions from distant Barlow’s Knoll. Colonel Milton J. Ferguson of the 16th Virginia Cavalry Regiment then took over the brigade.

Location of the monument to Jenkins’s Brigade

The monument is about three miles east of Gettysburg on the East Cavalry Battlefield. It is on the west side of Confederate Cavalry Avenue about 800 feet north of where it makes a hard turn to the east and turns into Gregg Avenue. (39°49’56.8″N 77°10’25.8″W)