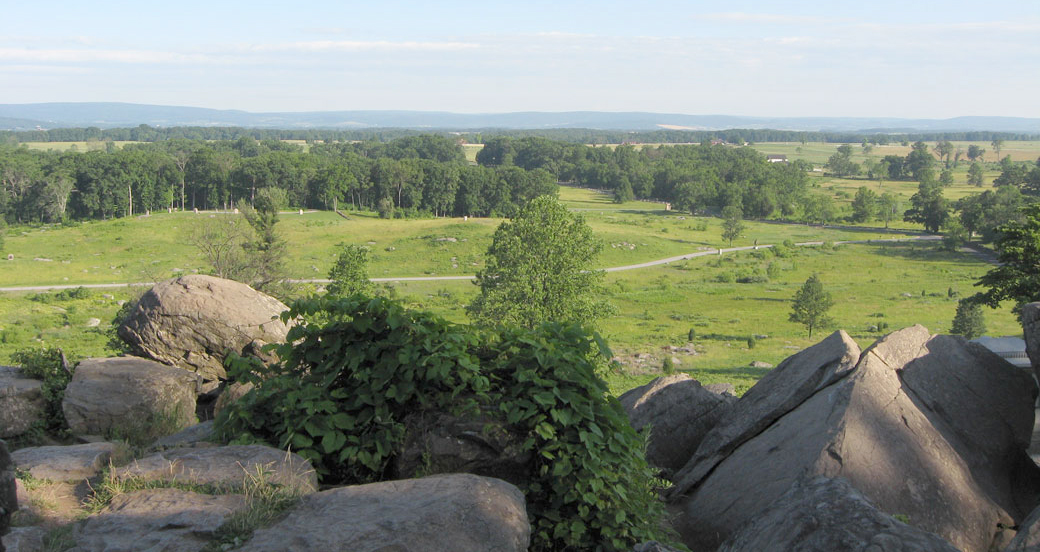 To the northwest Warren would have seen Sickles’ Third Corps line thinly stretched from Emmitsburg Road (about a mile in the distance) and bending back to end at the Devil’s Den (just out of frame to the left). Confederate artillery along the distant treeline were dueling with Union batteries. The Confederate thrust through the Peach Orchard (in the distance to the left of center) had not yet begun when Warren was sizing up the situation, but in a short time the landscape in the photograph would be the scene of desperate fighting.

The gap in the trees just to the right of the center opens up into one of the bloodiest places in North America – The Wheatfield. Twenty thousand men fought in the small field during the afternoon of July 2nd, with almost 6,000 of them becoming casualties. Confederate attacks moved in from the left and from directly in the distance, while Union counterattacks were thrown in from the right.

The white markers in front of the tree line on the ridge across the valley – Houck’s Ridge – are monuments along Ayers Avenue to the regiments of the United States Regulars, who counterattacked from the base of Little Round Top and across the ridge, reaching the Wheatfield on the other side of the woods before Confederate pressure from in front and flanking fire from the left forced them back.

The road running across the low ground in the photo – the Valley of Death – is Crawford Avenue, named after Brigadier General Samuel Crawford, commander of two brigades of Pennslvania Reserves who counterattacked from the right side of the photo across to the hight ground of Houck’s Ridge, the final attack of the day. Crawford’s statue can be seen along the road about a third of the way from the right side of the photo.