The Cashtown Inn was established in 1815 and is still in operation today as a restaurant and B&B. Cashtown is a small village located about eight miles northwest of Gettysburg along the Chambersburg Pike. Modern U.S. 30 has been moved a bit to the north and bypasses the historic village center.

The village was first occupied by Confederate forces in October of 1862 during General Stuart’s raid into Pennsylvania.

Lee’s invasion of Pennsylvania at the end of June of 1863 brought the enitre Army of Northern Virginia to the village. Gen. Jubal Early’s Division of the 2nd Corps came through first on June 26. On June 29 General A.P. Hill’s 3rd Corps arrived, with Hill making the Cashtown Inn his headquarters. Robert E. Lee had ordered his army to concentrate at Cashtown, and it’s possible that the great battle could have been fought there had Hill not sent General Henry Heth’s Division into Gettysburg on July 1st, where a meeting engagement with Union General Buford’s cavalry turned into the largest battle of the war.

Although Cashtown narrowly escaped the fighting, it played host to the Army of Northern Virginia as it marched through on its way to the fight, with the army’s supply and ammunition wagons parked all through the area for several days. After the fighting it became a vast hospital for the Confederate casualties, and was the starting point for General Imboden’s long train of wounded that snaked its way back to Virginia after the battle. 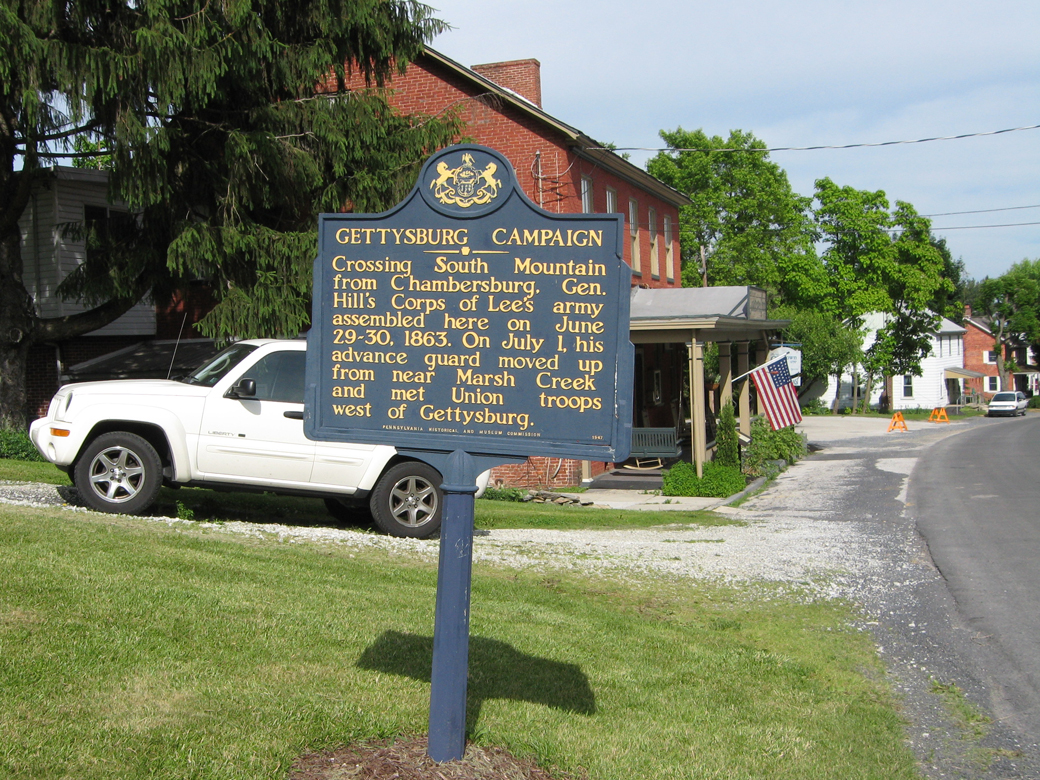 From the Virginia historical marker:

Crossing South Mountain
from Chambersburg Gen.
Hill’s Corps of Lee’s Army
assembled here on June
29-30, 1863. On July 1, his
advanced guard moved up
from near Marsh Creek
and met Union troops
west of Gettysburg.

An historical marker to Imboden’s Brigade is also at the front corner of the Inn. It is part of the series created by the the United States War Department in the first decade of the 1900s to outline the positions of Confederate brigades, divisions and army corps around the Gettysburg battlefield and in outlying areas related to the battle.