The main monument to Battery I, First Ohio Light Artillery is north of Gettysburg on Howard Avenue. (Howard Avenue West tour map) A tablet on Baltimore Pike near the Evergreen Cemetery Gatehouse shows the battery’s position after the evening of July 1. (National Cemetery tour map)

The battery was commanded at the Battle of Gettysburg by Captain Hubert Dilger, a German artillery officer who took a leave of absence to come to America when the Civil War broke out. He was awarded the Medal of Honor for his actions at the Battle of Chancellorsville.

The monument is just over thriteen feet tall and is made of Quincy granite. It was dedicated by the State of Ohio on September 14, 1887.

From the front of monument:

Fidus Et Audax*
Erected by
The State of Ohio

This Battery, Captain Huber Dilger Commanding, marched with the 11th Corps from Emmittsburg to Gettysburg July 1. At once upon arriving it advanced rapidly to the Carlisle Road and having taken position near this spot, immediately engaged the enemy. See left panel.

Reenforced by Wheeler’s New York Battery Captain Dilger advanced twice from this position. Retired with the 11th Corps, but halted and again engaged the enemy before crossing the bridge into the town. During the remainder of the battle the Battery held the extreme right of Maj. Osborn’s line on Cemetery Hill. Loss 13 wounded.

Tablet and markers on Cemetery Hill

From the battery’s left flank marker on Howard Avenue:

Left
Battery I
1st. O.L.A.
Four guns were posted 3 yards in rear of this tablet

From the right flank marker: 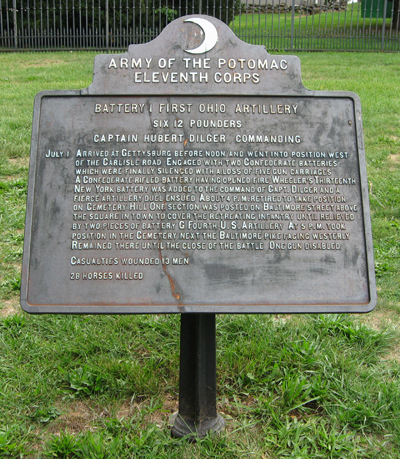 From the marker in the National Cemetery:

July 1. Arrived at Gettysburg before noon and went unto position west of the Carlisle Road. Engaged with two Confederate batteries which were finally silenced with a loss of five gun carriages. A Confederate rifled battery having opened fire Wheeler’s Thirteenth New York Battery was added to the command of Capt. Dilger and a fierce artillery duel ensued. About 4 p.m. retired to take position on Cemetery Hill. One section was posted on Baltimore Street above the square in town to cover the retreating infantry until relieved by two pieces of Battery G Fourth U.S. Artillery. At 5 p.m. took position in the Cemetery next the Baltimore Pike facing westerly. Remained there until the close of the battle. One gun disabled.

Marker in the National Cemetery showing the position of Battery I on July 2 and 3. The Evergreen Cemetery gatehouse is in the right distance.

Location of the marker on Cemetery Hill

The marker is on the northeastern edge of the National Cemetery, near the Evergreen Cemetery gatehouse.

See more on history of Battery I, First Ohio Light Artillery in the Civil War