The monument to the 4th New York Volunteer Cavalry Regiment is south of Gettysburg on Pleasonton Avenue north of the Pennsylvania State Monument. (Pleasonton Avenue tour map) It was dedicated by the State of New York in 1889.

Lieutenant Colonel Augustus Pruyn commanded the regiment  during the Gettysburg campaign, It consisted of 298 men and  was assigned to the 2nd Brigade, 2nd Division, Cavalry Corps. 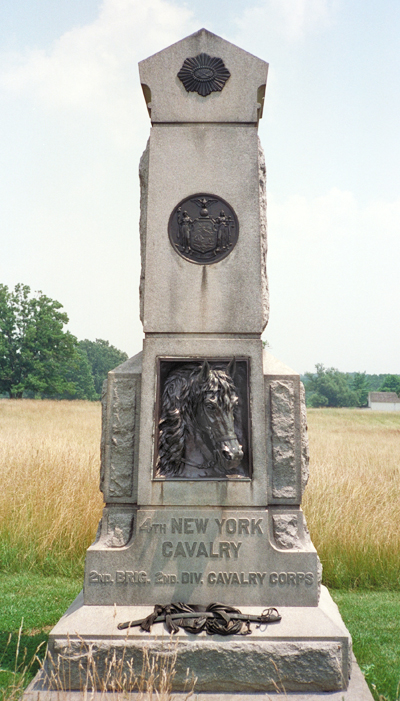 From the front of the monumen (top right):

Bronze tablet from the monument

From the tablet on the monument’s rear:

This regiment participated in
the Gettysburg Campaign until
reaching Hanover Junction
June 30th, when with the Brigade
it was detached and moved to
Manchester where it picketed
the surrounding country until
July 3rd, when it proceeded to
Westminster. On the 4th it
joined Kilpatrick’s Division
in pursuit of the enemy and with
it participated at Monterey
Pass that night, and in the many
other cavalry engagements
until the enemy recrossed
the Potomac. 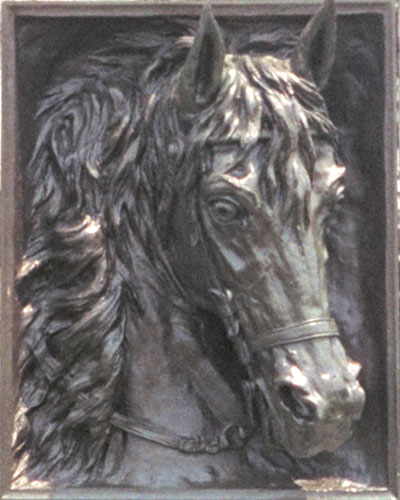 Detail from the monument

The monument is south of Gettysburg about 45 yards north of the intersection of Pleasonton and Humphreys Avenues.