The monument to the 5th New Hampshire Volunteer Infantry Regiment is south of Gettysburg on Ayers Avenue near its intersection with Sickles Avenue. (Ayers Avenue – Loop tour map) 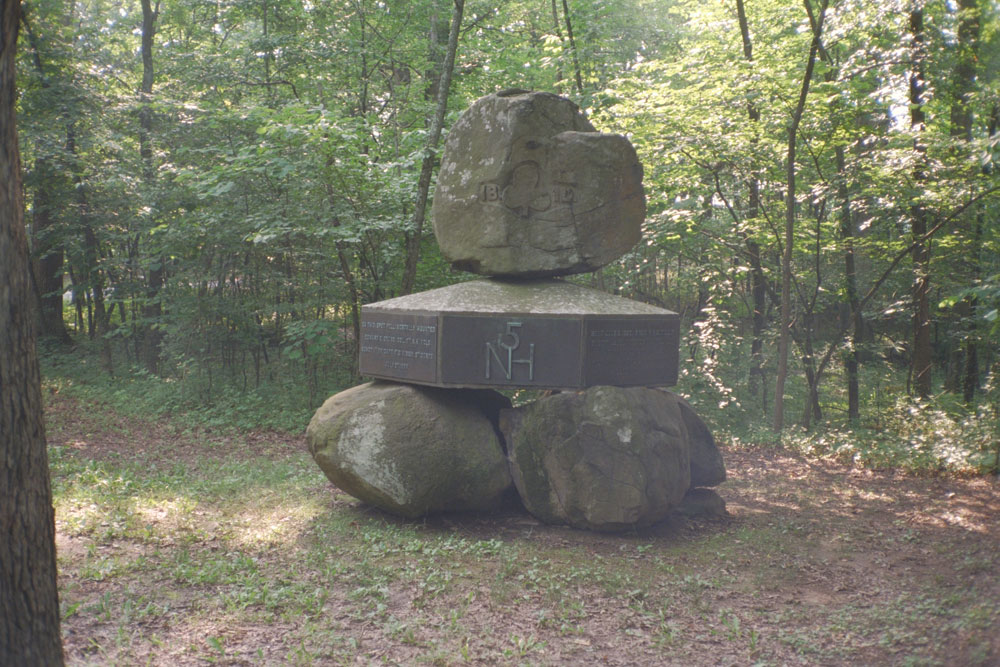 About the 5th New Hampshire monument

The monument was dedicated on July 2nd, 1886. It is made up of boulders taken from the Gettysburg battlefield joined together by a horizontal, octagonal stone of New Hampshire granite. The six and a half foot tall monument symbolizes the “hard, enduring, patient, and unmovable” men of the Granite State.

Eight metal tablets around the central stone briefly tell the regiment’s story at Gettysburg and list the men who were killed or mortally wounded in the battle. Around the edges of some of the tablets you can see the original text carved into the stone underneath. The carved text was difficut to read and had some errors, so the bronze tablets were added in 1901.

The 5th New Hampshire at Gettysburg

The 5th New Hamprshire was commanded at the Battle of Gettysburg by Lieutenant Colonel Charles E. Hapgood of Amhearst, while Colonel Edward Cross had been in command of the brigade since May as senior colonel.

Cross’ Brigade led the counterattack of Caldwell’s Second Corps Division into the Wheatfield on the afternoon of July 2nd, moving south from Wheatfield Road. The Fifth New Hampshire was on the left flank of the brigade. They were somewhat sheltered in the woods to the east of the Wheatfield while half of the brigade was exposed in the open, but they were also vulnerable to flanking fire from the Devil’s Den area.

The brigade had paused halfway across the field to steady the battle line and Colonel Cross moved down the line preparing to resume the attack. He had reached his old regiment at the site of the monument when he was mortally wounded by a Confederate sharpshooter. Lt. Colonel Hapgood pointed out the man to Sergeant Charles Phelps, who dropped the Rebel. Phelps himself would be mortally wounded before the battlle was over.

The counterattack was not resumed and the 5th New Hampshire held its position in the woods against increasing Confederate pressure, even after running out of ammunition. The regiment was finally relieved by the advance of the U.S. Regulars.

The 5th New Hampshire Infantry Regiment suffered the most battle deaths of any Union regiment in the Civil War, with 295 men killed in action.

From the tablets around the monument:

The State of New Hampshire
erected this monument
July 2nd, 1886
to commemorate the valor of her sons.

Location of the monument to the 5th New Hampshire

The monument to the 5th New Hampshire is south of Gettysburg on the southeast side of Ayers Avenue just north of Sickles Avenue. Ayers Avenue is one way southwest. (39°47’42.1″N 77°14’30.8″W)