The main monument to the 24th Michigan Volunteer Infantry Regiment is west of Gettysburg on Meredith Avenue. (Stone & Meredith Avenues tour map) A position marker is at the foot of Culp’s Hill along Slocum Avenue showing the regiment’s location on July 2 and 3. (Stevens Knoll tour map) 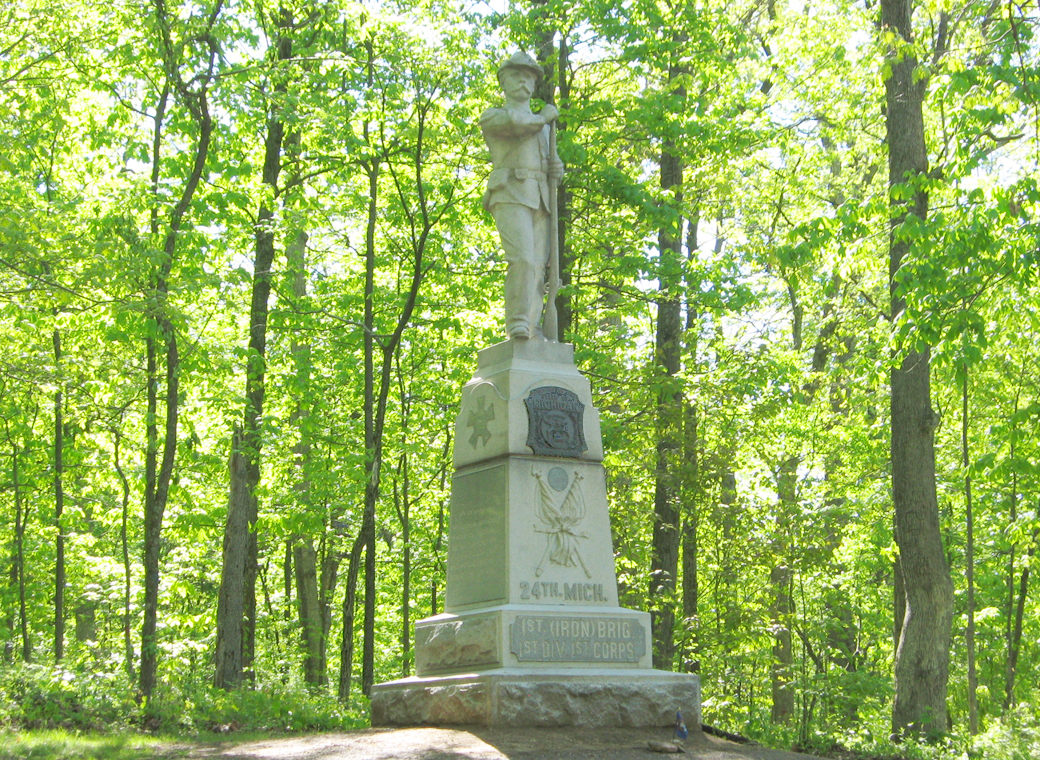 About the Monument to the 24th Michigan Infantry

The monument is made of granite and stands just over 14′ tall. On top of a pedestal a statue of an enlisted man of the 24th Michigan loads his rifle. He is wearing the distinctive black hat of the Iron Brigade. Below his feet is the brass tablet placed on all State of Michigan monuments at Gettysburg.

The 24th Michigan Infantry at Gettysburg

Colonel Henry A. Morrow commanded the 24th Michigan at Gettysburg. He was wounded on July 1st. Captain Albert M. Edwards then took command.

The 24th lost more men killed and wounded than any Union regiment at Gettysburg. Seven color bearers were shot down. Colonel Morrow himself took the colors twice before he was wounded.

Monument to the 24th Michigan Infantry at Gettysburg

From the south side of the monument:

Arriving upon the field to the south of these woods in the forenoon of July 1st, this regiment with others of the brigade (2nd and 7th Wisconsin and 19th Indiana) charged across the stream in front (Willoughby’s Run) to the crest beyond. Assisting in the capture of a large portion of Archer’s Tennessee Brigade, it was then withdrawn to this position where it fought until the time the line was outflanked and forced back.

From the north side of the monument:

From the east side of the monument:

The marker shows the location where the 99 survivors of the regiment dug in on the north side of Culp’s Hill after their retreat from Seminary Ridge on the evening of July 1. The men would hold this position for the remainder of the battle.

Monument to the 24th Michigan on Culp’s Hill

From the marker at the foot of Culp’s Hill:

The marker on the northwest side of Culp’s Hill