The monument to the 20th Connecticut Volunteer Infantry Regiment is southeast of Gettysburg along Slocum Avenue on Culp’s Hill. (South Culp’s Hill Tour Map) It was erected in 1885 by the State of Connecticut.

The Brig. formed on this line on the morning of July 2nd. At eve it moved to the support left of army. Returning, it found the position and woods on rear occupied by Johnson’s Division, Ewell’s Corps. During the night it lay in line of battle. At dawn, July 3rd, the 20th Conn. advanced under cover of artillery and fought 5 hrs. driving the enemy and reoccupying the works. Was relieved by the 123rd N.Y. In the afternoon moved to support the 2nd Corps against Longstreet’s assault.

This regiment went from Va. with the 12th A.C. to Army of Cumberland, marched with Gen. Sherman to the sea. 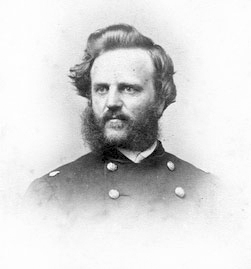