A monument and a marker to Major General Winfield Scott Hancock are on the Gettysburg battlefield, and his statue is on the State of Pennsylvania Monument. Hancock’s equestrian monument is southeast of Gettysburg on Cemetery Hill. (East Cemetery Hill tour map) It was dedicated in 1896 by the State of Pennsylvania. A marker erected on Hancock Avenue in 1888 shows where Hancock was wounded during Pickett’s Charge. (Hancock Avenue Pt. 2 tour map)

From the tablet on the rear of the monument

“The Senate and House of Representatives of the United States of America in Congress Assembled resolved (Joint Resolution approved April 21, 1866). “That in addition to the thanks heretofore voted by joint resolution, approved Jan. 28, 1864, to *** and the officers and soldiers of the Army of the Potomac for the skill and heroic valor which, at Gettysburg, repulsed, defeated and drove back, broken and dispirited, the veteran Army of the Rebellion, the gratitude of the American People, and the Thanks of their Representatives in Congress, are likewise due and are hereby tendered to Major General Winfield S. Hancock, for his gallant, meritorious and conspicuous share in the great and decisive victory.”

Location of the main monument to Winfield Scott Hancock at Gettysburg

The main monument to General Hancock is south of Gettysburg on East Cemetery Hill. It is on the east side of Baltimore Pike 75 yards northeast of the Evergreen Cemetery gatehouse. (39°49’16.8″N 77°13’44.0″W)

Marker showing the location where General Winfield Scott Hancock was wounded. The Codori farm is in the distance.

From the front of the marker

Erected by
Comrades and Friends

Rear view of the Hancock Wounded marker, with the State of Pennsylvania monument in the distance.

Location of the Hancock wounded marker at Gettysburg

Winfield Scott Hancock and his identical twin Hillary Baker Hancock were born on February 14, 1824 in Montgomery Square, Pennsylvania. He graduated from West Point in the class of 1844 and joined the infantry.

Hancock served in the Mexican War under his namesake and was brevetted for gallant and meritorious conduct. A wound received at Churubusco prevented him from participating in the capture of Mexico City, which he always regretted. Between the wars Hancock served in a variety of posts in Minnesota, Missouri, Florida, Kansas Utah and California.

In the Civil War

With the outbreak of the war Hancock was given command of a brigade. In the Peninsula campaign became known as “Hancock the Superb.” He took over his division from the mortally wounded Israel Richardson at Antietam and led it in the attack on the Marye’s Heights at Fredericksburg, where he was wounded.

It must have been a difficult question where to put a monument to Hancock at Gettysburg. He dominated the field beginning at Cemetery Hill on July 1, when he rallied the men of the 1st and 11th Corps. On July 2 he was up and down the line where his 2nd Corps fought along Plum Run and in the Wheatfield, saving the collapsing Union flank and sacrificing itself to stop Longstreet’s attack. And his finest moment may have been on July 3 as he slowly, defiantly rode along his lines during the intense artillery barrage that preceded Pickett’s Charge. His actions in stopping the charge, being wounded at its height, and refusing to leave the field until victory was certain are the stuff of legend.

Although Hancock would suffer from the effects of his wound for years, he returned to command the 2nd Corps in the spring of 1864. The fighting in the Wilderness and at Spotsylvania and Cold Harbor took a toll on Hancock as well as his corps, and by the Siege of Petersburg both were tired and worn. His defeat at Reams’s Station combined with ongoing complications from his wound convinced him to give up field command in November. The rest of the war saw him in quieter duties, commanding the First Veteran Corps and the Shenandoah Valley

Hancock supervised the execution of the Lincoln assassination conspirators, and took command of the Middle Military Department in Baltimore. In 1866 he was given the Department of the Missouri, where Hancock did not do well in his dealings with the Cheyenne and Sioux. Fortunately for Hancock, President Johnson wanted to replace Philip Sheridan in the Fifth Military District, comprising Louisiana and Texas, and the two men swapped districts. In November of 1866 Hancock was also belatedly given the Thanks of Congress “for his gallant, meritorious, and conspicuous share in the great and decisive victory” of Gettysburg.

Hancock’s success dealing with the volatile elements of Reconstruction in this very political position led to his gathering a number of delegates for Democratic candidate for president in 1868. But after Grant’s victory in 1868 put the Republicans firmly in charge in Washington, Hancock was transfered to the bleak Department of the Dakotas.

The death of Meade in 1872 left Hancock as the army’s senior major general, and Hancock took up command of the Department of the Atlantic at its headquarters on Governor’s Island in New York. In 1879 he became commnder-in-chief of the Military Order of the Loyal Legion of the United States.

In 1880 Hancock was chosen as Democratic candidate for president. The difference between the two candidates was less than 10,000 popular votes, but Republican James Garfield won a large electoral majority.

Hancock continued as commander of the Division of the Atlantic and in 1881 became president of the National Rifle Association. He died in 1886 at Governor’s Island and is buried in Norristown, Pennsylvania. 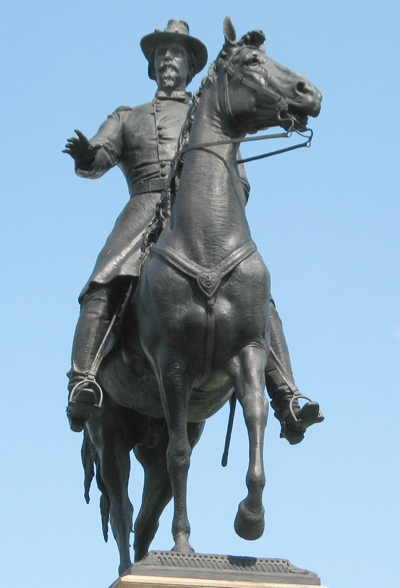