There are three monuments to Major General John Fulton Reynolds on the Gettysburg battlefield and his statue is on the State of Pennsylvania monument, a sign of the respect and affection he had earned.

An equestrian monument is west of Gettysburg on Chambersburg Pike (U.S. 30) (Stone and Meredith Avenues tour map) A monument on South Reynolds Avenue marks the site where he was mortally wounded. (South Reynolds Avenue tour map) The earliest of the monuments to Reynolds and one of the first at Gettysburg is in the National Cemetery. (National Cemetery tour map) There is also a statue of General Reynolds, a native of Pennsylvania, on the State of Pennsylvania monument.

Major General John F. Reynolds was the highest ranking officer killed at the Battle of Gettysburg and one of the most senior officers to die in the Civil War. His decision to commit his infantry west of Gettysburg set the course of the fighting, but his death early in the battle was a serious blow to the Union Army.

From the equestrian monument on Chambersburg Pike

From the reverse of the equestrian monument

The equestrian statue was sculpted by Henry Kirke Bush-Brown, who also created the Meade and Sedgwick equestrian statues and the bust of Lincoln in the Lincoln Speech Memorial. It was dedicated in 1899, with Reynolds’ nephew Charles Reynolds Evans pulling the cord that unveiled the monument.

The statue weighs four and a half tons, yet is superbly balanced with only two of the horse’s feet on the ground. The monument follows the universally denied “rule” (or coincidence) that a monument’s horse with two feet off the ground indicates its rider was killed in battle.

Location of the equestrian monument to General Reynolds at Gettysburg

The equestrian monument to General Reynolds is west of Gettysburg on the north side of Chambersburg Road. It is about 55 yards east of the intersection with Stone Avenue. (39°50’16.4″N 77°15’04.6″W)

Monument to where General Reynolds fell 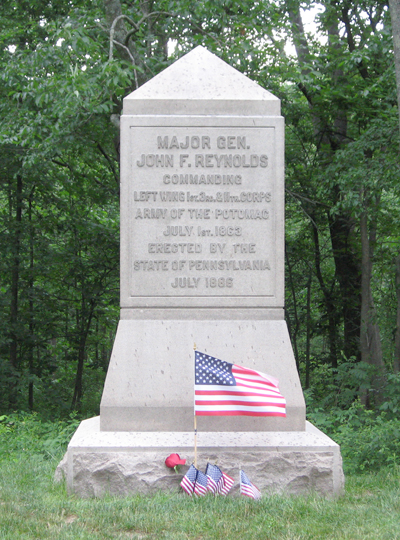 Monument at the site where General Reynolds fell

From the front of the monument on Reynolds Avenue:

Monument to where General Reynolds fell

The monument showing where General Reynolds was mortally wounded is west of Gettysburg on the west side of South Reynolds Avenue. It is about 50 yards north of the intersection with Meredith Avenue. (39°50’03.8″N 77°15’03.4″W)

Bronze statue in the National Cemetery

The statue of Reynolds in the National Cemetery was the first bronze statue at Gettysburg. It was funded by the survivors of the First Corps. Sculptor John Quincy Adams Ward created it in 1871, cast from four bronze cannon barrels, and dedicated it in 1872.

To his memory by the First Army Corps.

From the right sife:

Monument to General Reynolds in the National Cemetery

The monument to General Reynolds is in the National Cemetery at Gettysburg. It is 50 yards southwest of the east gate of the cemetery on Baltimore Street. Unauthorized vehicles are not permitted in the cemetery. (39°49’16.8″N 77°13’49.2″W) 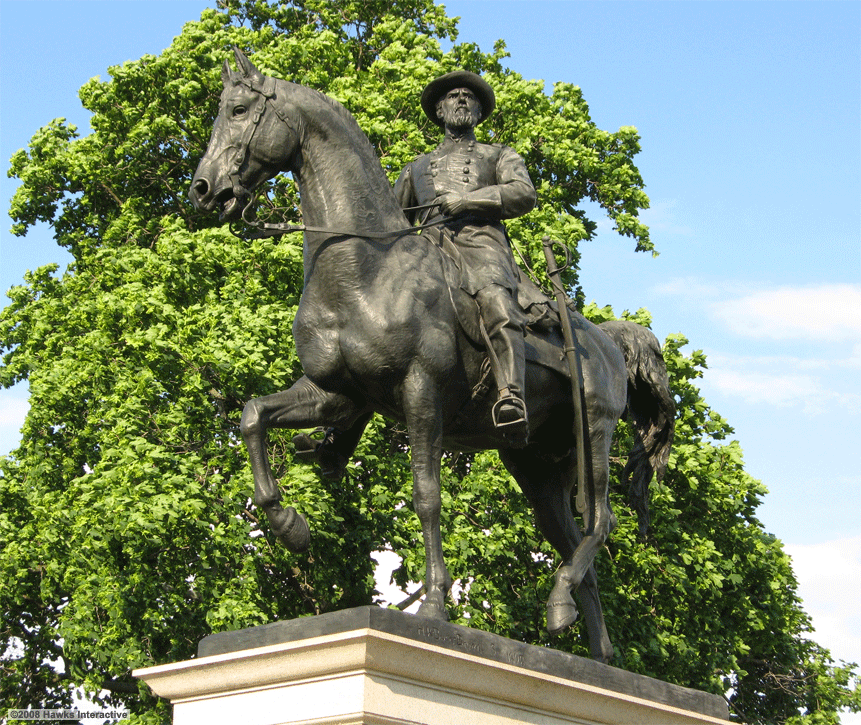 John Fulton Reynolds was born in 1820 in Lancaster, Pennsylvania, a little over fifty miles away from Gettysburg. He graduated from the West Point class of 1841, ranking 26th out of 50 cadets. Reynolds then spent the next four years in the artillery of the Atlantic coast garrisons.

He received two brevets in the Mexican War, then spent the next fourteen years in garrison duty. In 1860 he became Commandant of Cadets at West Point.

Reynolds quickly became a brigadier general after the outbreak of the war. While commanding the 1st Brigade of Pennsylvania Reserves in the Peninsula in June of 1862 he was cut off behind Confederate lines and captured.

Reynolds was exchanged in August, and commanded a division at Second Bull Run. When Lee invaded Maryland Reynolds was sent to command Pennsylvania’s militia at Governor Curtin’s insistence. He returned to the army to command the 1st Corps at Fredericksburg, where one of his divisions under George Meade made the only break in the Confederate lines.

Reynolds was called to Washington after the Battle of Chancellorsville to confer with President Lincoln. It is believed that he was offered command of the army at that time. But he turned it down because he felt he would be continually second guessed by Washington like commanders in the past. Instead the army was given to his former subordinate, George Meade.

Reynolds was given command of the left wing of the army at the beginning of the Gettysburg campaign: his own 1st Army Corps as well as the 3rd and 11th. He was leading the 2nd Wisconsin Infantry Regiment to the relief of Buford’s cavalry in Herbst’s Woods when he was mortally wounded by a shot to the head, exactly 22 years to the day after his West Point graduation.