The monument to Union Brigadier General John Geary is southeast of Gettysburg on Culp’s Hill. (North Culp’s Hill tour map) It was created by J. Otto Schweitzer, one of seven statues by the Swiss-born sculptor on the Gettysburg battlefield.* It was dedicated in 1915 by the Commonwealth of Pennsylvania. 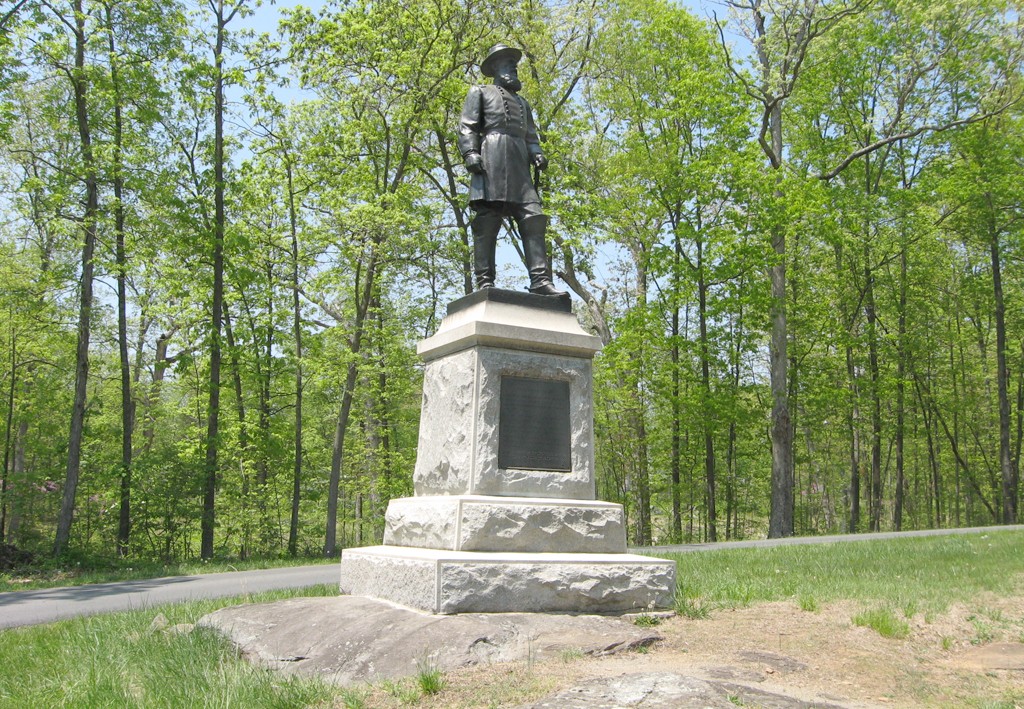 John Geary was born near Pittsburg in 1819. He worked as a surveyor and construction engineer on a railroad, and was active in the local militia. Geary was six foot six inches tall and around 260 pounds, a large man today and a giant in the 1800s.

He served in the Mexican War with General Scott’s advance to Mexico City as Lieutenant Colonel of the Second Pennsylvania Volunteers, and was wounded five times during the attack on Chapultepec. His heroism there earned him promotion to colonel and the attention of the nation.

Geary was appointed postmaster of San Francisco and became the city’s last alcalde. After California became a state he was San Francisco’s first mayor, and its youngest. Geary Street is named after him.

He returned to Pennsylvania in 1852 because of his wife’s failing health. She died in 1853. Geary then turned down an appointment as governor of Utah Territory, but agreed to become governor of Kansas Territory in 1856.

Geary began his administration of “Bleeding Kansas” with the intention to be a neutral peacemaker, but he came to blame the proslavery faction for the violence in the territory and proposed a plan to admit Kansas to the Union as a free state. The plan was not adopted, and when James Buchanan took office he removed Geary, who returned to Pennsylvania and remarried.

With the outbreak of the Civil War Geary became Colonel of the 28th Pennsylvania Volunteer Infantry Regiment, which he uniformed and equipped at his own expense. He was wounded and captured at Leesburg in March of 1862, but was immediately exchanged.

He was promoted to brigadier general and given a command in Banks’ Fifth Corps in the Shenandoah Valley. This became part of Pope’s Army of Virginia, and Geary was wounded twice at the battle of Cedar Mountain.

He returned to the army in October of 1862. His command was now part of the 12th Corps of the Army of the Potomac. At Chancellorsville he was knocked unconscious by the near miss of a cannon shell.

After Gettysburg Geary was transferred west with the 12th Army Corps. His son, Edward, was killed at the Battle of Wauhatchie, dying in his father’s arms. Geary commanded his division in Sherman’s march to the sea and was appointed military governor of Savannah.

After the war he served two terms as Republican Governor of Pennsylvania, even though he was a lifelong Democrat. He died of a heart attack in 1873, at the age of 53, and is buried in Mount Kalma Cemetery in Harrisburg, Pennsylvania.

*The other six statues by Schweitzer at Gettysburg are President Lincoln, David McM. Gregg and Alfred Pleasonton from the State of Pennsylvania Monument; William Wells on South Confederate Avenue, Andrew Humphreys on Emmitsburg Road and Alexander Hays on Hancock Avenue.