There are two monuments and a position marker to the 106th Pennsylvania Volunteer Infantry Regiment at Gettysburg, showing the regiment’s location at various stages of the battle.

Lieutenant Colonel William L. Curry, a Philadelphia paperhanger, commanded the 106th Pennsylvania Infantry at the Battle of Gettysburg. It brought 335 men to the field, losing 9 killed, 54 wounded and 1 missing.

During the day on July 2nd several companies of the regiment were involved in heavy skirmishing along Emmitsburg Road and around the Bliss farm. As Longstreet’s attack made its way north in the late afternoon the regiment countercharged Wright’s Georgia Brigade.

In the evening of July 2 most of the 106th Pennsylvania was sent to East Cemetery Hill to help defend the Union batteries there. It arrived too late to take part in throwing back the Confederate attack. But it was not returned because the commanders there had no confidence in their own infantry. The location is shown by the position marker.

While most of the regiment was sent to Cemetery Hill two companies and a small detail were left behind near the Copse of Trees with the rest of the brigade and helped repel Pickett’s Charge on July 3rd. The monument by the Copse of Trees shows this location.

The monument that is now by the Codori House on Emmitsburg Road was the original monument to the 106th Pennsylvania on the Gettysburg battlefield. It was erected at the Copse of Trees and dedicated in 1884 by the 106th Regimental Association. When state funding became available in 1889 to build a larger monument this one was moved to its present location on the east side of Emmitsburg Road just north of the Codori Farmhouse.

The Emmitsburg Road location commemorates the regiment’s activities on July 2nd, when several companies were engaged in heavy skirmishing along Emmitsburg Road during the day and in the evening the entire regiment countercharged Wright’s Georgia Brigade to this point, recapturing Union artillery pieces and taking many Confederate prisoners.

Facing east from the Emmitsburg Road, looking at the front of the 106th Pennsylvania Infantry monument. The Codori house is off camera on the right, and the State of Pennsylvania Monument cane seen in the distance

Erected by the Regimental Association 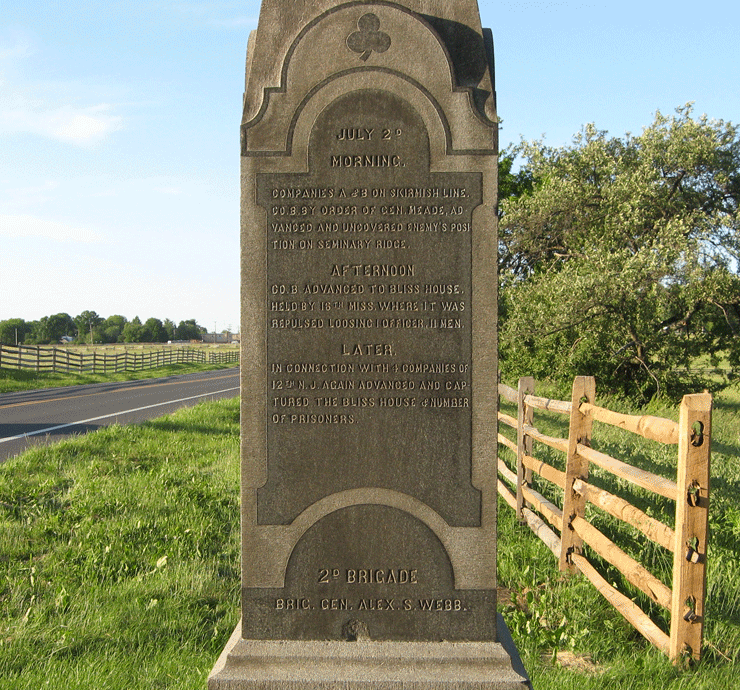 From the left (north) side of the monument

Companies A & B on skirmish line.
Co. B. by order of Gen. Meade, ad-
vanced and uncovered enemy’s posi-
tion on Seminary Ridge.

Afternoon
Co. B advanced to Bliss House.
Held by 16th Miss. where it was
repulsed losing 1 officer, 11 men.

Later.
In connection with 4 companies of
12th N.J. again advanced and cap-
tured the Bliss House & number
of prisoners. 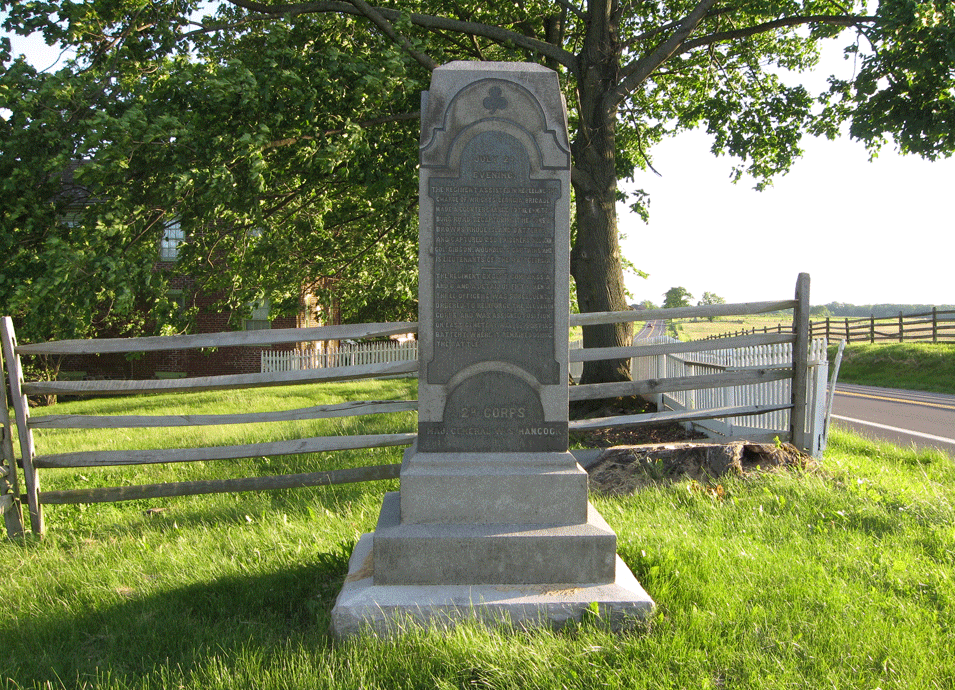 Looking south at the north side of the monument. The Codori house is in the distance and Emmitsburg Road is on the right

From the right (south) side of the monument

July 2d
Evening.
The regiment assisted in repelling the charge of Wright’s Georgia Brigade. Made a countercharge to the Emmittsburg Road, recapturing the guns of Browns Rhode Island Battery, and captured 250 prisoners, including Col. Gibson wounded, 5 captains and 15 lieutenants of the 48th Georgia.

The regiment except companies A and B and a detail of fifty men & three officers was subsequently ordered to reinforce the Eleventh Corps and was assigned position on East Cemetery Hill, supporting Battery, where it remained during the battle.

July 3d
The regiment with Eleventh Corps on East Cemetery Hill, except Companies A. B. and a detail of fifty men from the other companies who remained with Brigade at this point and assisted to repel Pickett’s charge.

Location of the monument to the 106th Pennsylvania on Emmitsburg Road

The 106th Pennsylvania Infantry monument at the Copse of Trees

The famous Copse of Trees is behind the monument, with the High Water Mark monument on the left

The 106th Pennsylvania’s monument on Hancock Avenue is on the northeast edge of the Copse of Trees next to the High Water Mark monument. It was dedicated in 1889 by the Commonwealth of Pennsylvania. This is the second monument to the 106th Pennsylvania at this location. The original monument was placed by the regimental association in 1884. When state funding became available in 1889 the smaller statue was moved to its current location on Emmitsburg Road (see above) and this statue took its place.

The monument is carved from Quincy granite and stands over 12′ high. It is topped by the trefoil symbol of the Union 2nd Army Corps formed of drums and stacked knapsacks.

A brass bas-relief on the front of the monument shows the regiment’s countercharge towards the Codori house on July 2nd. Above the bas-relief a decorative row of 40 small trefoils – symbol of the Federal Second Corps – runs around the monument, representing the 40 rounds carried by each soldier.

From around the top of the monument

Position of the Regiment July 2, 1863. In the evening the Regiment assisted in repulsing a charge of the enemy on this line and made a counter charge to the Emmitsburg road in which 3 guns of Battery B, 1st Rhode Island were recovered and at the Codori House captured 250 prisoners.

The evening of July 2nd the Regiment moved to East Cemetery Hill to reinforce the 11th Corps and remained there as indicated by monument. During the 3rd, companies A and B continued here and assisted in repulsing the final assault of the enemy on the afternoon of the 3rd.

Position marker for the 106th Pennsylvania on Cemetery Hill

A position marker on East Cemetery Hill  shows the regiment’s location on the evening of July 2 and during July 3.

From the marker on Cemetery Hill:

“‘Your batteries can be withdrawn when that regiment runs away”

The marker showing the position of the 106th Pennsylvania Infantry on East Cemetery Hill is about 230 feet to the east of Baltimore Street on the northern boundary between National Park land and tour bus parking. (39°49’20.4″N 77°13’46.0″W)